When you’re married to a Johnny Cash fan, Folsom Prison has to be on the itinerary.  Folsom opened in 1880, as the first maximum security prison, as well as the first to have electricity. Built to house 1,800 prisoners, it is currently at 165% of capacity.  Famous inmates included Charles Manson, ringleader of a mass murder cult, and Erik Menendez, convicted along with his brother of murdering their parents.

Johnny Cash recorded at Folsom Prison in 1968, at the behest of a local reverend who did prison outreach.  Cash had just found sobriety, and had a new found respect for those struggling. After the Folsom shows, Cash continued to perform at prisons and became increasingly outspoken about the need for reform. He was particularly troubled by the idea that young, first-time offenders were thrown in with hardened criminals.

Despite the skepticism of Columbia Records, Folsom Prison stayed on the country music charts for 90 weeks, and in the Billboard Top 200 for 122 weeks. The album was certified Gold in the fall of 1968, and certified Triple Platinum in 2003. 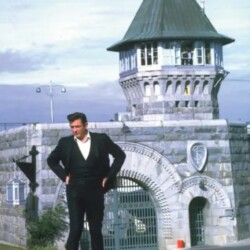 Johnny Cash said, “Folsom Prison inmates were the most enthusiastic crowd I ever played”. 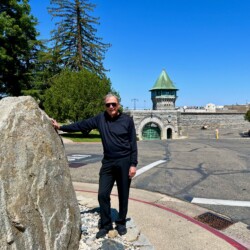 Mike at the gate – as close as they would let us stand!