Springfield is the headquarters of Bass Pro Shops, a fishing and hunting retail chain majority owned by Johnny Morris, who now also owns Cabela’s, another outdoor retail chain.  With a net worth of approximately $7 billion, this guy decided to create the museum of his dreams.  Wonders of Wildlife in Springfield is a nonprofit education-themed attraction in two parts – one part is taxidermied animals in wildlife dioramas, the other half is an enormous aquarium with 35,000 species of fish, reptiles and birds.  At 350,000 square feet, it took us almost four hours to see everything!

From there, we moved down to Branson, MO where Top of the Rock (also created by Johnny Morris) overlooks the Ozark Mountains with the Ancient Ozarks Natural History Museum, showcasing Native American history, including details of Geronimo’s leadership and more arrowheads than you’ve ever seen in your life.

After that, Dogwood Canyon (ALSO created by Johnny Morris) in Lampe, MO is 10,000 acres of wild and natural beauty with hiking, biking, wildlife tours and fishing.

We met up with our friends from France, Michèle and her son Bob Cohen.  They were anxious to visit the US at the first opportunity when the borders opened on Nov 8th!  We told them we’d be in Springfield, MO, and they figured out how to meet us there.  No easy task! 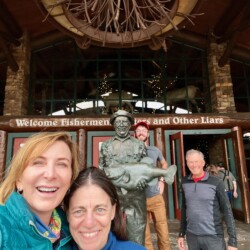 Outside the entrance of Bass Pro Shop Headquarters – “Welcome Fishermen, Hunters and other Liars” 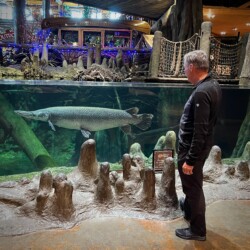 Inside the store, Mike gapes at a giant garfish. Fun fact: you can eat a garfish, but its eggs are poisonous. 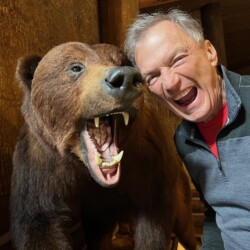 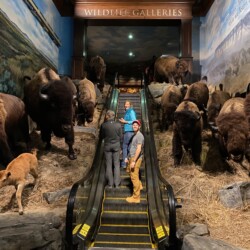 An amazing escalator – we were engulfed by sounds of snorting and pawing, like we were in the middle of the herd of buffalo. 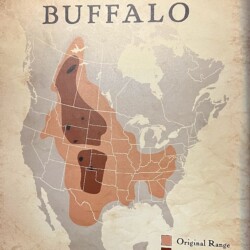 Buffalo were hunted to near extinction in an effort to reduce food for Native Americans, to force them onto reservations. 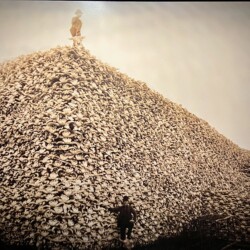 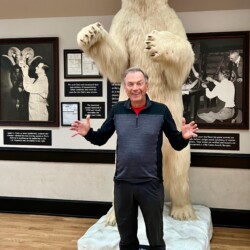 Just for a sense of scale, the grizzly bear is the one in the back. 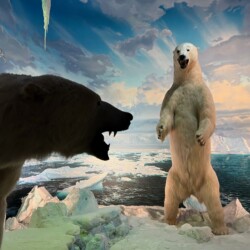 Did you know that polar bear skin is black, to absorb heat? And their hair isn’t white – it’s translucent. 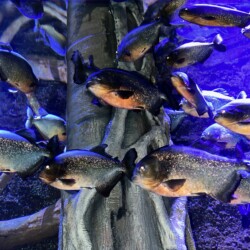 A shoal of 300 piranhas could devour an adult human in about 5 minutes. Shudder. 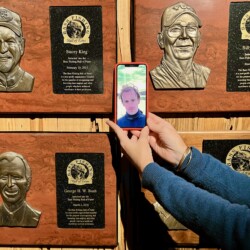 We decided that Bill François belonged in the Fishing Hall of Fame. 🏆 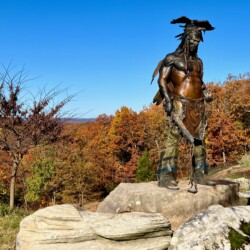 “Crow Warrior” by Todd Paxton, showing a warrior preparing for battle. His clenched fists and unrelenting stare show his mental and spiritual resolve. 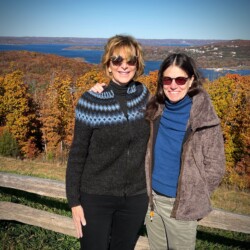 It’s been way too long – 18 months of Zoom calls from France to the US and back! 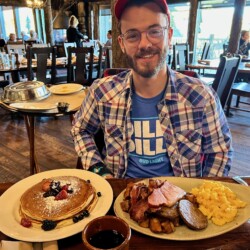 Bob’s appetite is legendary, and the standard American farmhand breakfast did not disappoint. 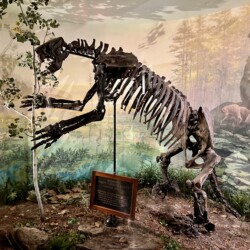 This prehistoric ground sloth was about the size of a bison. 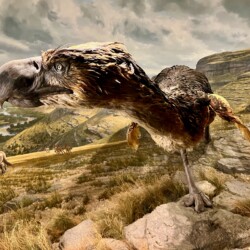 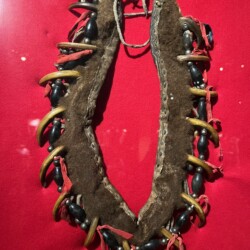 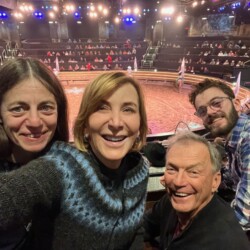 Bob and Michelle wanted to see a real “country” show in Branson so we ended up at the truly dreadful Dolly Parton show. Not one Dolly Parton song. 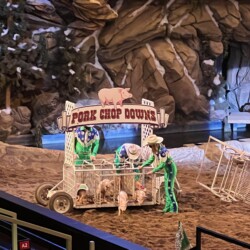 The most redeeming feature of the Dolly Parton show was the Pork Chop Derby. We were laughing so hard we cried. 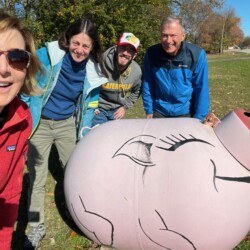 A quick stop by Arkansas, so designated by a Piggy TANK. 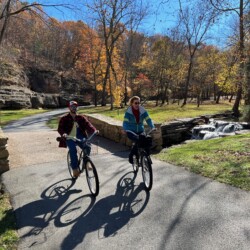 Biking at Dogwood Canyon, near the border between Missouri and Arkansas. 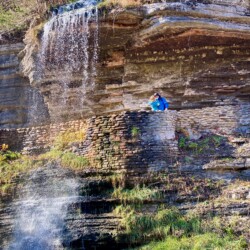 This spot is Spirit Falls, where remains of Native Americans from 8,000 years ago were discovered. 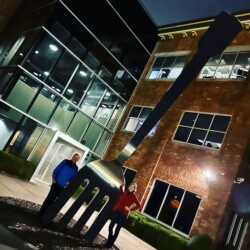