Lobster is not an uncommon last meal request for death row prisoners – which is strange when you consider the history.  In the 18th century, prisoners revolted against being served lobster more than three times a week.  What turned lobster from trash to treasure? Some of it was cooking technique.  Back then, lobster were so plentiful that they would wash up on the shore, already dead. When a lobster dies, its stomach enzymes seep out into the rest of its body, which makes the meat go bad quickly. This is why lobster is usually cooked alive – if a lobster is dead, it has probably already started rotting, and it can make you sick.

Lobsters switched from taboo to delicacy for a few reasons. The first reason was the Civil War. In the 1860s, canning became a viable way to get food rations to thousands of soldiers at a time. As it turned out, once lobster was cooked, it was pretty easy to can. So in the mid-1800s, people as far away as California were able to buy and eat Maine lobster for the first time. Canned lobster was cheap protein.

The second reason for the change was the rise of railroads and, consequently, the rise of tourism. People who had long eaten canned lobster, and who were not aware of the food’s low-class status in its place of origin, would take a trip to New England, try fresh lobster for the first time, and lose their minds over how delicious it was. As a result, demand for fresh lobster in other cities around the country rose. Because lobster must be shipped live, it ended up costing more to serve it. By the early 1900s, it was associated with Gilded Age decadence, thanks to people like millionaire glutton Diamond Jim Brady, who would reportedly eat six or seven lobsters at a sitting. Thus, in a span of 125 years, a trash food became a delicacy. 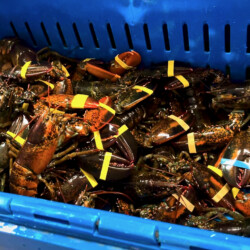 The morning catch, on its way to the “pound”, a holding tank. The rubber bands are to protect the lobsters from each other. 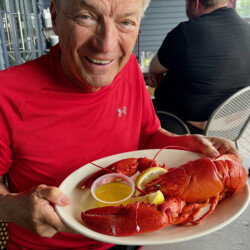 Mike didn’t quite hear the server when she pointed out that we didn’t eat the knuckles yet. When she left our table, he looked at the lobster and said, “Where are the nipples?” 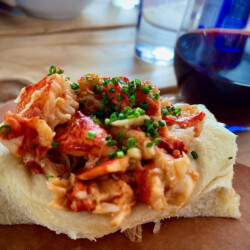 We are no longer lobster roll virgins! There are many versions, and they are hotly debated. This one, from Eventide, had a small hum bao type roll, along with lobster sautéed in brown butter. We polished off one, and ordered a second! 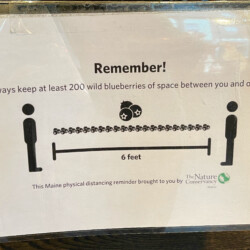 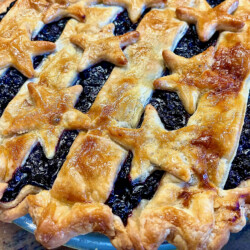 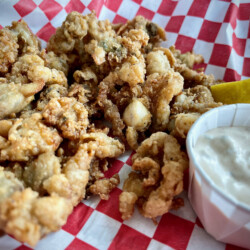 Whole belly clams (as opposed to strips) are the choice here. Really delicious! 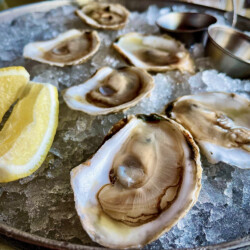 “I love oysters. It’s like kissing the sea on the lips.” – Léon-Paul Fargue 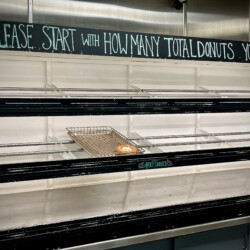 The answer is ONE. A Holy Cannoli! I scored the last donut before they closed the doors 😅 There were still five hopeful people in line behind me who groaned and left when I bought it!