How many people does it take to make a town?  How about TWO??  The mayor and his wife? The official “Center of the World” lies in the town of Felicity, CA – near the California/Arizona border.  Jacques-André Istel is a French-American recreational parachutist, investment banker and later in life, historian, widely responsible for popularizing parachuting in the United States. He is considered “the father of American skydiving”. In 1985 he expanded his talents by writing the children’s book “Coe: The Good Dragon at the Center of the World”, which served as inspiration for the town’s creation.    After Istel was unanimously voted mayor, he erected a pyramid to mark the exact spot of the world’s “center”.  Over the last 35 years, he’s added a chapel, a piece of the Eiffel Tower staircase, and a 15 foot sundial that incorporates Michaelangelo’s “Hand of God”.  His MOST ambitious undertaking is the Museum of History in Granite, which consists of 18 one-hundred foot granite monuments, meant to engrave in granite the “highlights of the collective memory of humanity”.   Religion, history, science, art, literature, mathematics.  From Attila the Hun to Copernicus. From cockroaches to Temples in Egypt.  From Prohibition mob bosses to Bernie Madoff.  It’s like Wikipedia exploded into granite.  It’s not even done yet!  We had to leave after two hours because we couldn’t absorb anymore.  My sponge was FULL. 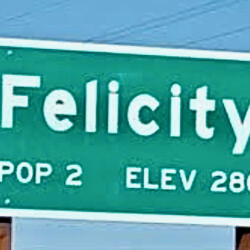 The town consists of 2,600 acres that Istel bought in the 1950’s. Named after his wife – now there’s some husband points. 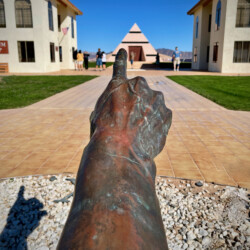 This is the Hand of God, which points right at the Center of the World. Whoa. 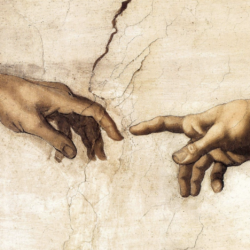 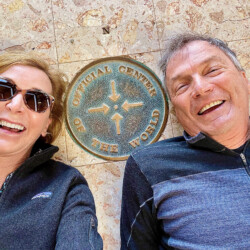 I thought it might be a little hotter here! 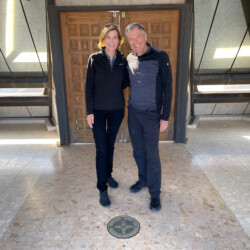 Tradition says you must make a wish at the Center of the World and it will come TRUE. 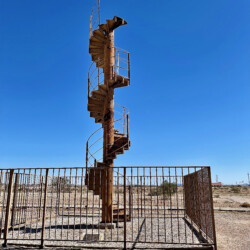 A piece of The Eiffel Tower! In 1989, some of the original staircase was removed to make way for lighter staircase material so the Tower wouldn’t sway in the wind. 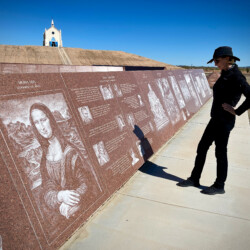 This is QUITE a bit larger than the real Mona Lisa. See the chapel on the hill above? A replica of a tiny church from Brittany, France. 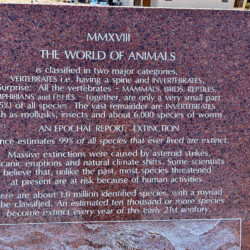 Did you know that vertebrates make up only 5% of the world’s species? I didn’t. 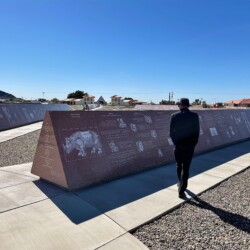 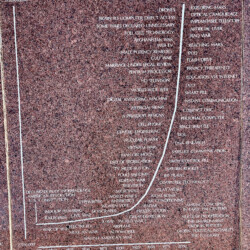 The choices are sometimes questionable. Male potency drugs ranked up there with reaching Mars?? 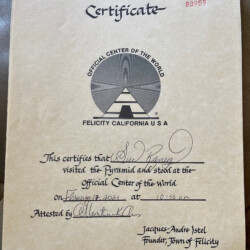 What? You’re still skeptical? Au contraire! I have a certificate! You have to admire a guy that figures out a revenue stream at $5 per person to fund his dream. Amazing.