We drove from Yellowstone’s East Entrance across the Chief Joseph Scenic Byway and Beartooth Highway through Cody and all the way over to Mammoth Hot Springs.  It’s definitely a summer trip – that entrance is only open May to October.  The Beartooth Highway rises to 10,947 ft. and has warnings about wind and cold.  Luckily, we had no freaky winter storms.  We did have tons of wildfire smoke. 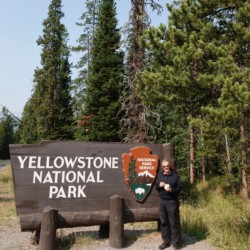 Mike with two of his favorite things: vanilla bean ice cream and a National Park. 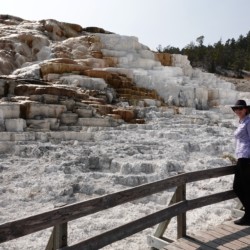 Devil’s Thumb at Mammoth Hot Springs is a great example of travertine, a kind of limestone that forms in terraces. Incredibly strong, it’s used in some countries, like Italy, as building material. 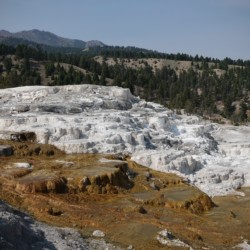 Minerva Terrace, named in the 1800’s for the Roman goddess of art. Makes me like the name Minerva slightly more. 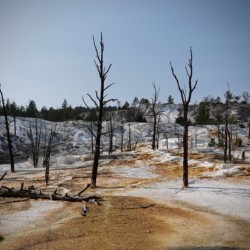 Dead trees at Mammoth Hot Springs grew centuries ago, when the springs were inactive. Once the springs became active, the calcium carbonate clogged their vascular systems. 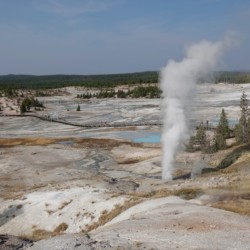 Quite dramatic, but not a geyser. Steam vents are the hottest of Yellowstone’s geothermal features. This one measures in at about 280 degrees Fahrenheit.. 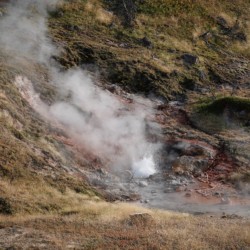 The gruesomely named Blood Geyser is red from iron oxide in the water. It’s been erupting constantly since first recorded in 1882. 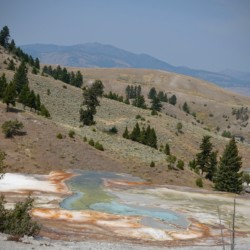 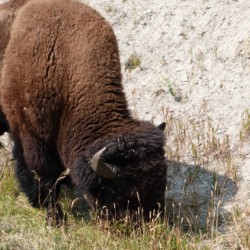 Yes, we were actually this close to a bison! He was right on the side of the road, and we had to drive by REALLY slowly so we didn’t spook him. 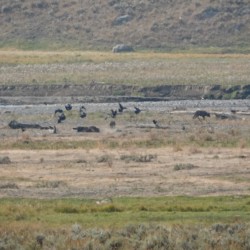 From 800 yards away, onlookers watched a bear kill and eat a bison. After hours of eating, the bear finally left (probably for a nap), and the wolves took over. When the wolves moved away for a second, the birds swooped in. Nature’s clean-up committee. 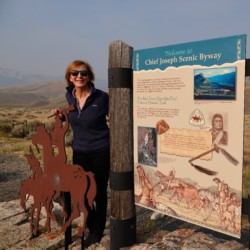 Chief Joseph and his tribe, the Nez Pierce, fought and outmaneuvered the US Cavalry in 1877 for a three-month long, 1,400 mile retreat along the West in hopes of leading his tribe to Canada. This 46 mile highway covers part of that territory. 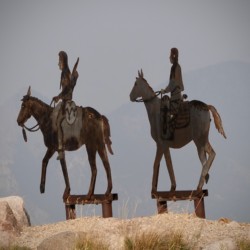 A sculpture commemorating Chief Joseph would have an incredible view behind it, if not for wildfire smoke. 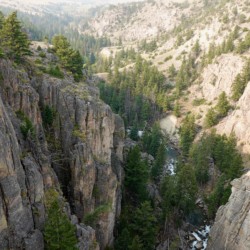 Chief Joseph admirably led his tribe through this canyon. In October of 1877, as winter set in on his exhausted tribe, he finally surrendered. “Hear me, my chiefs! I am tired. My heart is sick and sad. From where the sun now stands, I will fight no more forever.”