Sequoia National Park highlights include the Mac Daddy of all trees, General Sherman (the largest tree in the world!), Moro Rock climbing, driving through the Tunnel Log and abundant wildlife. The combo of high elevation, warm weather and 9 miles of hiking made for a tiring but fun day! 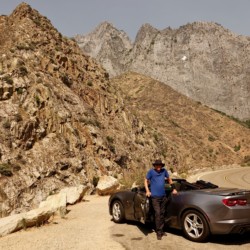 Sometimes rental car companies screw up. Instead of the sedan we ordered (yawn) we got a Camaro convertible! 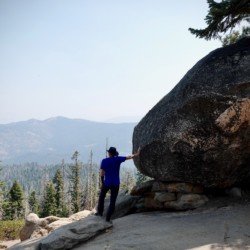 Mike checking out the haze from the California wildfires. Only ten days later, the park was closed temporarily due to severe forest fires. 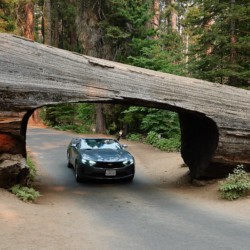 After a giant log fell across the road in 1937, a tunnel was carved out as an attraction, to help popularize support for the parks. 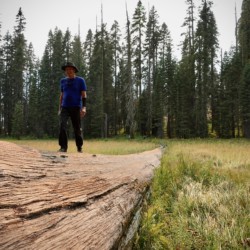 Walking the length of a fallen giant. 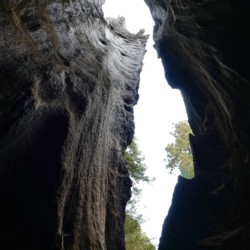 Chimney Tree – we could stand right inside a giant sequoia shell! 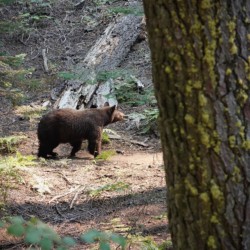 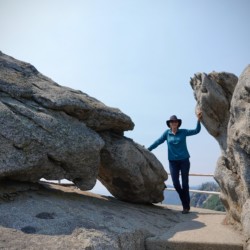 Climbing up Moro Rock is not for the faint of heart, either for the effort or for the height. 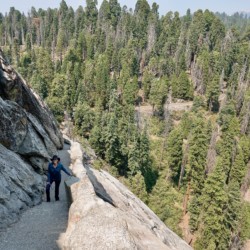 Something like 350 steps straight up a narrow granite ledge. I’m glad my knee made it. 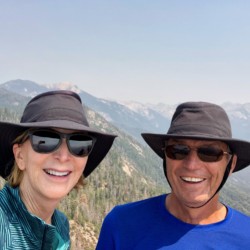 View at the top of Moro Rock, 6,725 ft., with the High Sierras in the background. 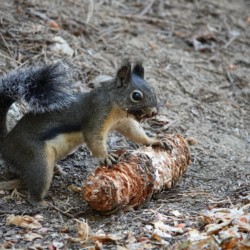 An industrious squirrel, chomping on that pine cone like it’s an ear of corn! 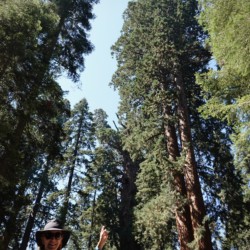 General Sherman, named after the Union Army general, is the largest tree on earth by volume. It’s 275ft. high, tough to capture in a photo. At somewhere around 2,500 years old, it’s middle aged by sequoia standards. If you filled it with water, it could fill almost 10,000 bathtubs, or a bath a day for 27 years. 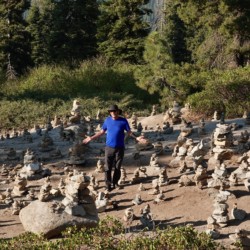 A forest of cairns – where the heck is the trail? 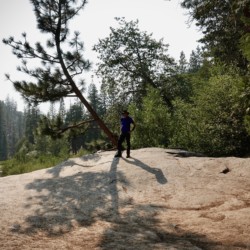 Muir Rock, where John Muir held the first meeting of the Sierra Club back in 1892, with the goal of “making the mountains glad”. 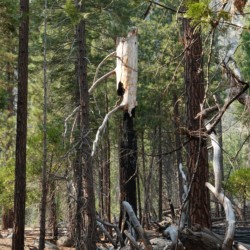 Sequoias are naturally resistant to fire due to their thick bark full of tannins. This tree may have breathed its last, though. 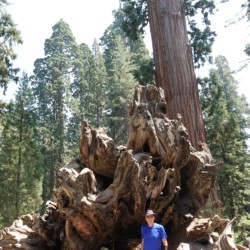 One of many shelters made from fallen logs. Crude accommodations, but better than a tent in the snow! 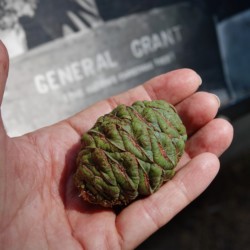 A giant sequoia pine cone is so small! The seeds are trapped tightly inside until insects or fire crack them open. 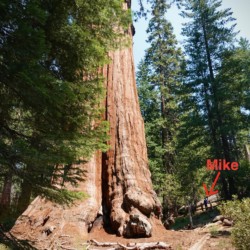 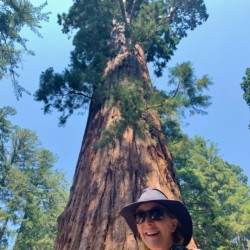 If the trunk on the General Grant tree was a gas tank on a car that got 25 miles per gallon, you could drive around the world 350 times without refueling.