Atomic energy and its resulting weaponization has always been extremely controversial.  The National Museum of Nuclear Science and History is a great museum to explore both the dark and the lighter sides of the issue. 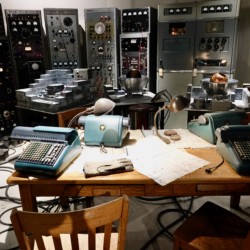 A workroom at Los Alamos, NM from 1944, when scientists were assembling the first atomic bomb. Question: How much plutonium could be packed into a bomb without making it too unsafe to handle? Code named The Manhattan Project, the remote location allowed scientists to operate secretly with a free exchange of ideas. 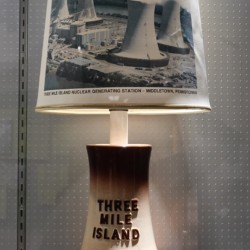 The Three Mile Island accident was a partial meltdown of a nuclear reactor in Pennsylvania, in 1979. The accident caused no deaths, but did cause increased cancer and birth defects, raising anti-nuclear safety concerns among activists and the general public, resulting in new regulations for the nuclear industry. And less lamps like this. 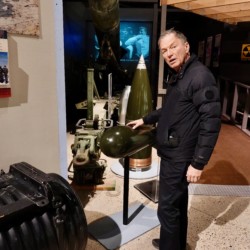 The compact size of the Davy Crockett missile, developed in the late 1950’s, brought nuclear capability to the infantry. At a weight of only 76 pounds, it could be mounted on a jeep or hand carried by a three-person team. 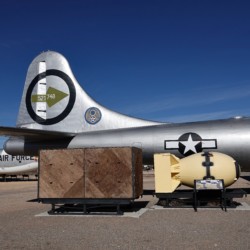 On June 1, 1945 the Interim Committee, composed of political, scientific and industrial leaders, unanimously recommended to President Truman that the bomb should be used against Japan as soon as possible, without prior warning. Truman reluctantly agreed. Mike once flew a nuclear bomb in his cargo plane when he was serving in Vietnam. It wasn’t live, but he still made a REALLY smooth landing. 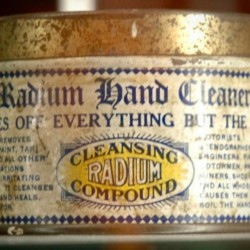 Directions: Moisten the hands with a little water then take a small bit of paste and rub thoroughly until all grease and ingrained dirt is loosened. Rinse off with water. The hands will then be clean, smooth and in healthy condition. Horsemen and dairymen will find this cleaner to be of value not only as a cleaner, but as a deodorizer. 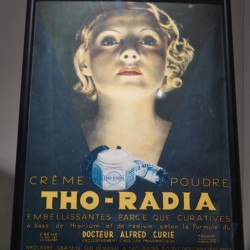 Tho-Radia was advertised as being a scientific method of beauty (Méthod Scientific de Beauté). The medical ‘benefits’ of radium had been highly publicized in the French press and were well known by the French populace in the 1930s. What could be healthier than a glowing complexion? 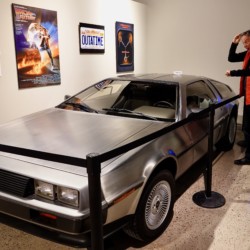 Marty McFly: “Your’e telling me you built a time machine out of a DeLorean?!” 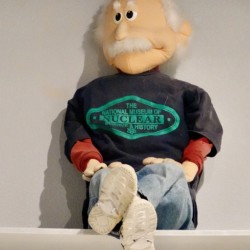 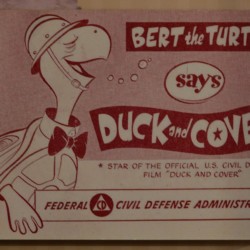 Duck and Cover procedures might seem silly. They are effective in saving lives outside the radius of the nuclear fireball. Instead of being near a window, investigating the flash of light, Duck and Cover protects people from flying glass and debris when mass evacuation is not possible. Basically, it’s better than doing nothing. 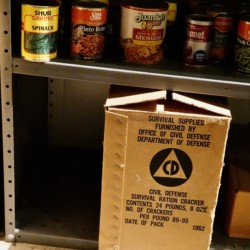 In the 1930’s Great Depression years, the U.S. government was looking for a way to promote iron-rich spinach as a meat substitute. To help out, they hired one of America’s favorite celebrities, Popeye the Sailor Man. Spinach sales skyrocketed by 30% – which was good, because spinach could be kept in a bomb shelter. 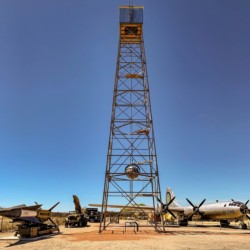 Trinity was the code name of the first detonated nuclear device, on July 16, 1945, as part of the Manhattan Project. The test was conducted at the remote, isolated and unpopulated White Sands Missile Range in New Mexico. It was felt over 100 miles away, with a mushroom cloud reaching 7.5 miles in height. This is a model of the tower that held the bomb. 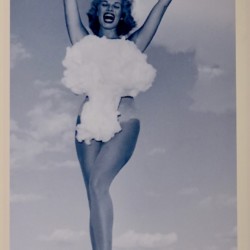 Miss Atomic Bomb was quite the attraction in Las Vegas. Since nuclear testing happened regularly, the Las Vegas Chamber of Commerce promoted the blasts by giving out calendars with her photo including detonation times and the best spots for viewing. Hotels were hawking their roofs as perfect places to see the mushroom clouds. 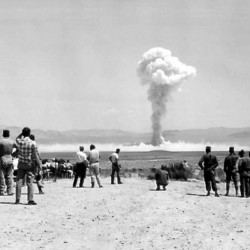 Las Vegas encouraged spectators in 1950 when Mike’s family lived here. His parents took him and his sister out several times to view above ground atomic bomb testing. Can you believe it?!