Seattle Theatre Group (STG) pulls together a group of donors annually to experience theater outside Seattle.  Live theater has a visceral bond between the performers and the audience.  The way the audience gasps, laughs, claps or cries matters deeply to the performers.   The audience attention feeds their souls. 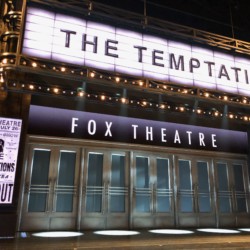 Ain’t Too Proud to Beg was a musical romp – My Girl, Papa Was a Rollin’ Stone, Just My Imagination and a killer version of I Wish It Would Rain. 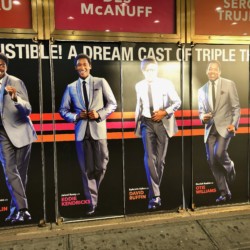 There have been 24 Temptation members from 1960 to the present day. What a struggle to handle what went on behind the scenes! 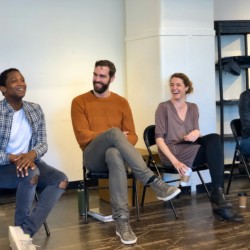 A chance to hear from performers – Jelani Remy (Ain’t Too Proud), Timothy Hughes (Hadestown), Claire Bryant (cellist for Moulin Rouge), and Kyle Dean Massey (Wicked). We listened to them audition, and asked how they keep their performances fresh and fun. 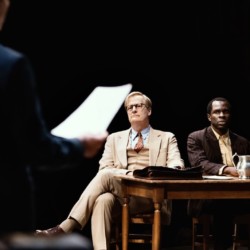 Jeff Daniels, starring as Atticus Finch in an updated “To Kill a Mockingbird”. Still taking place in the Depression era south, this version also made parallels to today’s racist attitudes. Sometimes it’s just the costumes that were different. 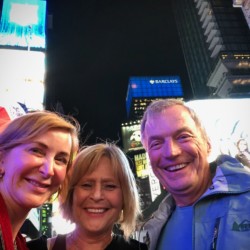 Met up with our buddy Bonnie Hirsch in Times Square. She knows it like the back of her hand. 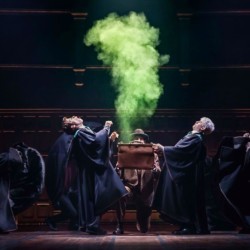 Harry Potter and the Cursed Child was a 5 1/2 hour show spread over 2 nights. At $68 million, it’s the most expensive non-musical show ever on Broadway. AMAZING special effects! 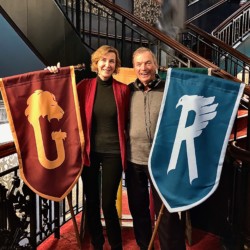 Gryffindor and Ravenclaw are in the house. We did remedial training with HP movies 1 to 6 to prepare. Good thing we could tell our gilleyweed from our golden snitches! 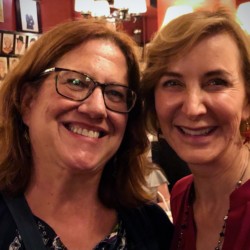 Another college chum, Marnee Hollis. So lucky to live in Chelsea! 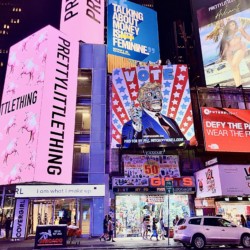 They Live! A campy Trump billboard in Times Square wants people to get out and VOTE! 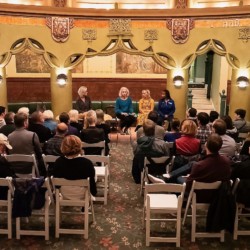 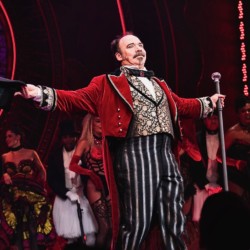 The Moulin Rouge emcee greeted us thusly, “Welcome, you gorgeous collection of reprobates and rascals, artistes and arrivistes, soubrettes and sodomites…” 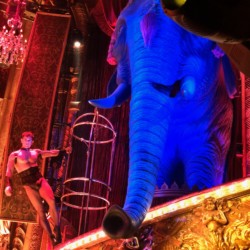 Holy moly – here’s something to distract you from the half-naked lady sword-swallowers. Look at that elephant! The music was a mash-up of over 70 pop song snippets. Think Diamonds Are Forever, Diamonds Are a Girls Best Friend, Material Girl and Single Ladies in ONE song! 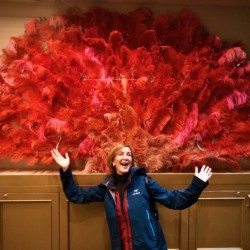 Getting my Fanny Brice on. This is the theater where Ziegfeld started the Follies. He also had a private men’s club upstairs where the Ziegfeld beauties were invited after the show. They probably didn’t wear Gortex like me, though. 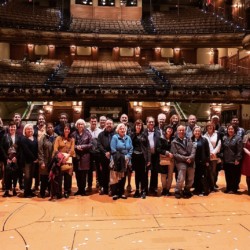 Our group onstage at the New Amsterdam Theater, which used to have a collapsed ceiling and mushrooms the size of dinner plates. Thanks to Team Disney, it’s now as beautiful as when it opened in 1903. 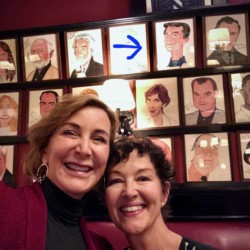 How wonderful to see my college roomie, Patti Ben Peterson, at Sardi’s – where her partner David Garrison has a caricature on the wall!