West Point is the oldest continuously occupied military post in the United States. Located on the Hudson River in New York, West Point was identified by General George Washington as the most important strategic position in America during the American Revolution.   In fact, he ordered enormous chains be built and stretched across the river to restrict the entry of British ships. 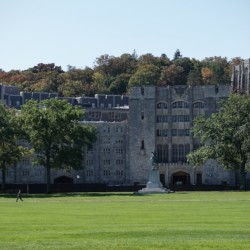 The parade grounds in front of Washington Hall. On horseback is General George Washington, commander of the Continental Army and the first President of the United States 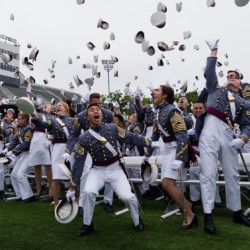 Newly commissioned Second Lieutenants traditionally throw their cap in the air at graduation. The hats are scooped up by local kids, who find a little treat, a little cash or a message of encouragement from the cadets. 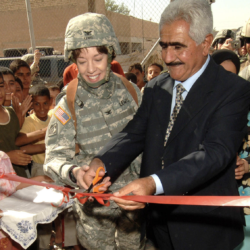 Being at West Point made us think of our friend, Col. Debra Lewis, who retired from the Army Corps of Engineers. She was in the FIRST class at West Point to admit women, in 1980! 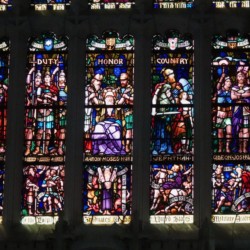 Per a speech from General Westmoreland in 1962, “”Duty, Honor, Country — those three hallowed words reverently dictate what you ought to be, what you can be, what you will be. They are your rallying point to build courage when courage seems to fail, to regain faith when there seems to be little cause for faith, to create hope when hope becomes forlorn”. 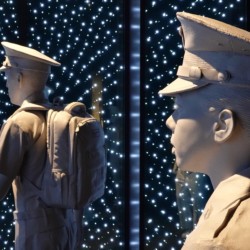 In terms of diversity, West Point ranks above average for racial diversity (as compared to other colleges in the US), but ranks poorly in terms of gender diversity. A full 80% of cadets are male. 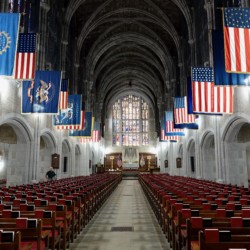 The Cadet Chapel displays many versions of the American flag, representing times of military conflict and resolution. 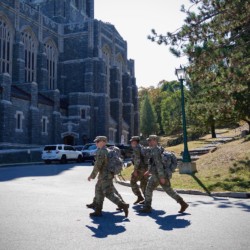 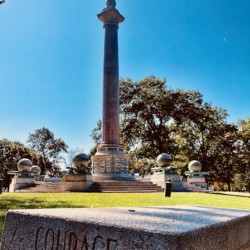 The Battle Monument was dedicated in 1897 by American Civil War veterans, funded out of monthly contributions from their pay. 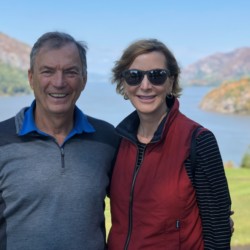 Standing in front of the magnificent Hudson Bay. You can see why Washington felt this location was strategically important. What a view!