Brutally quick Scottish history:  William Wallace (aka Braveheart) was a 13th century Scottish warrior who led the Scots against King Edward I of England in 1296, the First War of Scottish Independence.  He was knighted for his bravery and leadership.  On trial for treason against England, Sir Wallace famously said, “I could not be a traitor to Edward, for I was never his subject.”  Following the trial, he was taken to the Tower of London, stripped naked and dragged by horse through the city.  He was strangled by hanging, but released while he was still alive, emasculated, disembowled and beheaded.  Then his body was cut into quarters.  His preserved head (dipped in tar) was placed on a pike atop London Bridge. His contemporary, Robert the Bruce, also a Scottish warrior, led the Scots in many battles against King Edward II of England, following the death of Wallace.  He was the crowned King of Scotland from 1306 to 1329, dying at the ripe old age of 55. 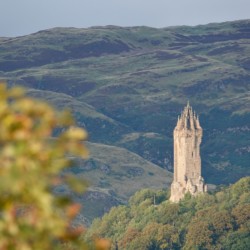 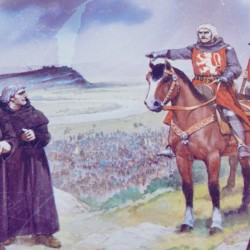 William Wallace as he would have appeared in battle. His weapons and armor were made of the finest craftsmanship available, a far cry from the depiction of Wallace as a commoner in the movie “Braveheart”. 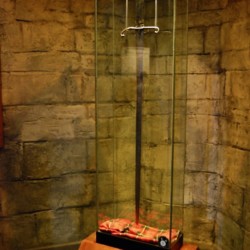 The giant two-handed sword of William Wallace, known as a claymore, is 5 1/2 feet long. A very fit Wallace, at 6 ft. 5 inches, swung it mightily in battle. 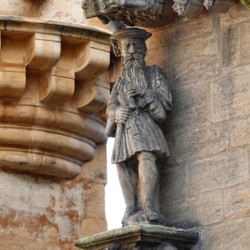 James V of Scotland (Mary Queen of Scots father), was known to sneak out of the castle occasionally, swapping his riches for rags to disguise himself and mingle with his subjects. Keeping an ear to the ground, so to speak. 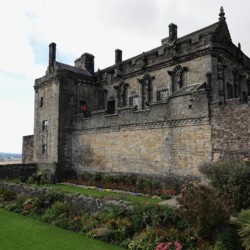 Stirling Castle is the birthplace of Mary, Queen of Scots who inherited the crown after her father died, when she was only six days old. 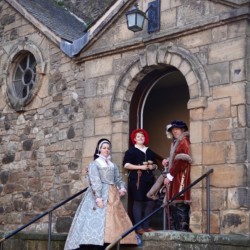 Characters at the castle obliged my request to pause so I could “make a likeness” of them. 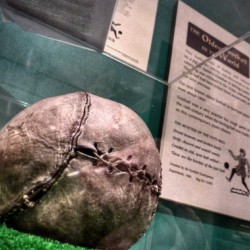 Worthy of note by Guinness Book of World Records – the oldest “football” in the world was found behind paneling in Stirling Castle during a remodel. It dates from about 1540! 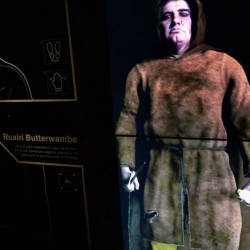 Immersive 3D taught us medieval battle weapons and tactics, as told by locals like this lad with a dagger. 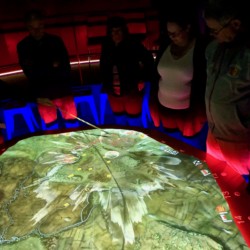 In the 1314 Battle of Bannockburn, the English outnumbered the Scots by 3 to 1. We chose our top secret strategies, then watched it play out before our eyes. 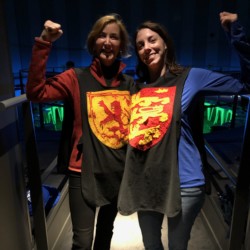 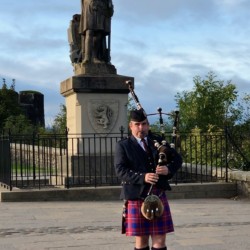 So excited was I to get a photo of this bagpiper playing in front of Robert the Bruce’s monument… that I forgot to set the parking brake on our car. As it slowly rolled across the parking lot, Jessica ran to the car, opened the door and jumped in, braking just before we hit another car and/or went over an embankment. Epic bravery! 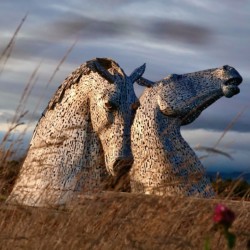 These 30 meter high sculptures are the Kelpies, shape-shifting mythological creatures, thought to have the strength and endurance of 10 horses.