We walked for hours through the city, every corner of which seemed steeped in history. 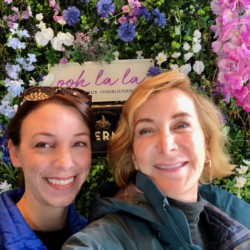 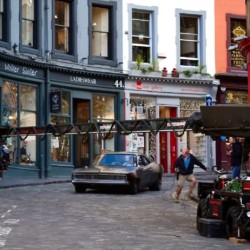 Fast and Furious 9 was filming on the same street as our hotel. We didn’t see any celebrities, just heard lots of loud cars. 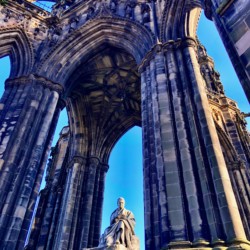 Sir Walter Scott, author of Ivanhoe, recognized by many as the inventor of the historical novel genre. He was also an accomplished attorney. 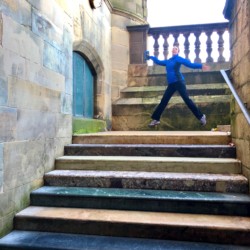 The Scotsman Steps, created by sourcing marble from the world’s major quarries. Each step is a different color, creating a cascading rainbow, topped off with a flying Jessica. 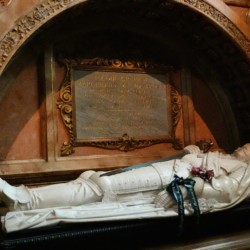 In St. Giles Cathedral we found the elegantly reposed Marquess of Montrose. He was a Scottish nobleman who defected to the English army and fought against his homeland. So heinous was his crime that the Scottish Parliament sentenced him to death by hanging, followed by beheading and quartering. As if there could be any other order? 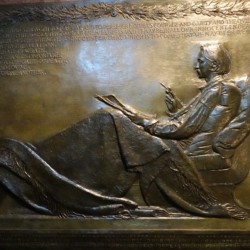 Also in St. Giles is the only memorial to Robert Louis Stevenson in his native country. Smoking a cigarette, with a warm blanket to ward off the chill, and writing – perhaps Treasure Island? Dr. Jekyll and Mr. Hyde? 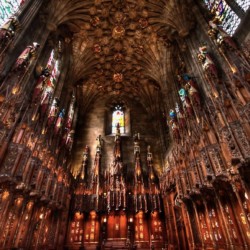 Thistle Chapel in St. Giles contains 16 chairs, one each for the 16 knights in the Order of the Thistle, the highest order of chivalry in Scotland. Only if one dies is a new one appointed in this room with great pomp and circumstance. 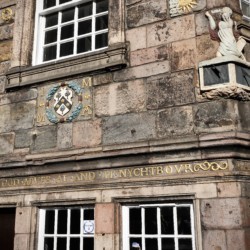 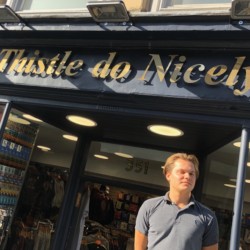 Edinburgh has its share of cozy little bookshops, some with Scottish lads posing outside the door. 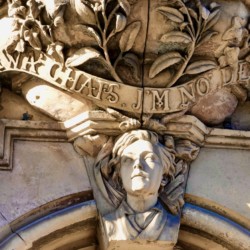 After a tragic building collapse in 1861 – which killed 35 people, rescuers were pawing through rubble when they heard a young boy shout, “HEAVE AWA’ CHAPS! I’M NO’ DEAD YET!” 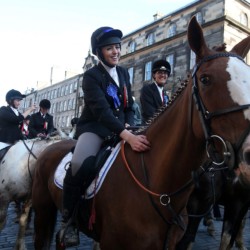 The Riding of the Marches dates back to the 12th century, when the city boundaries were annually inspected by horseback. There were hundreds of horses in the Royal Mile, Edinburgh’s main street. The good news is the boundaries are officially secure! 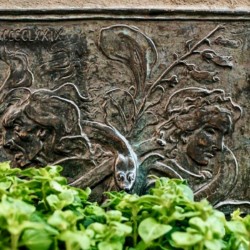 The Witches’ Well, a cast iron fountain, honors the Scottish women who were burned at the stake between the 15th and 18th centuries. Suspects were frequently bound by the hands and feet, then thrown into a lake to determine their innocence. Those who drowned were cleared, and those who had the audacity to survive were accused of witchcraft and sent to the stake. 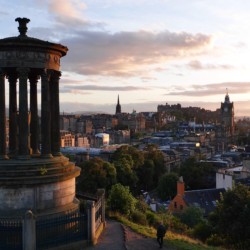 We hiked up to Calton Hill just before sunset for a stunning view of Edinburgh. 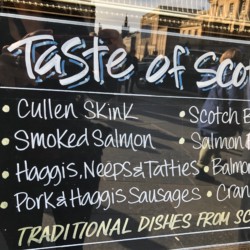 Oh, they have a mighty different diet here. We had to Google a lot! 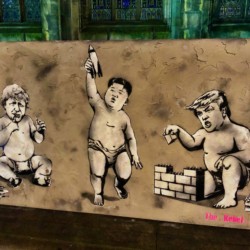 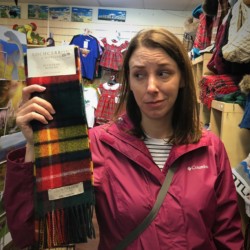 Neither Jessica nor I are fans of our Buchanan Clan Plaid, but we are officially part Scottish. 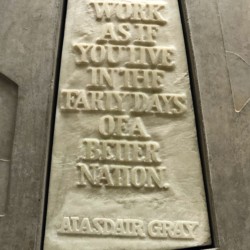 Chiseled into a street wall in Edinburgh, a reminder for us all. 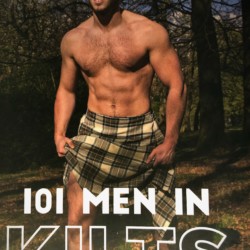