Bears!  We heard there were plenty of bears, but we didn’t expect to see over twenty grizzlies on our first day.  Katmai Nat’l Park is one of the premier grizzly viewing areas in the world, and July is the month to see them feast on salmon.  We were given strict instructions not to carry any food or drink (except water) as bears would be roaming all around our rustic campground. 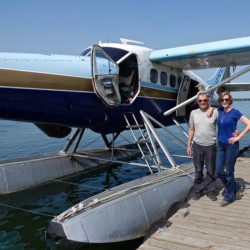 We took an old but trusty Otter from King Salmon, AK to Brooks Lodge. 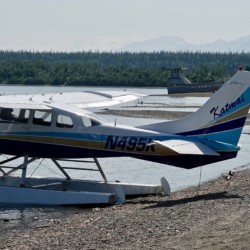 Our first bear was walking the beach before we even got our luggage out of the plane. 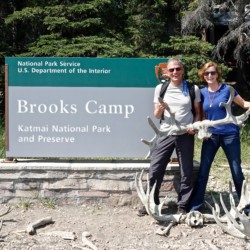 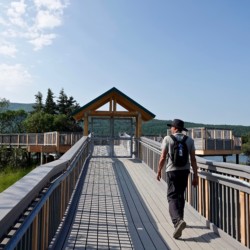 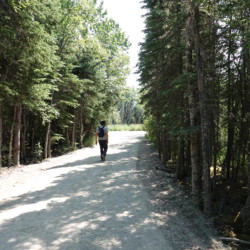 A long walk in the woods, where bears are roaming freely. We made sure to keep the conversation going and the eyes observant. 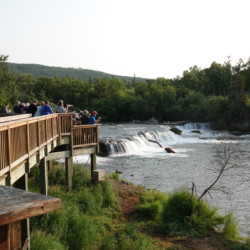 Viewing deck over the falls, or the bearparazzi. 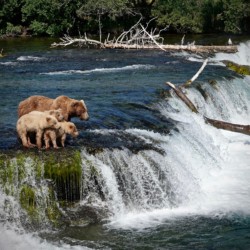 Mama patiently teaching her three cubs how to catch salmon. 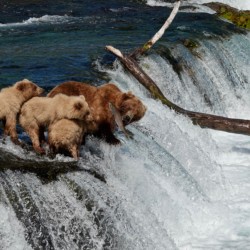 We thought the cubs would tumble over the falls, but they held their ground. 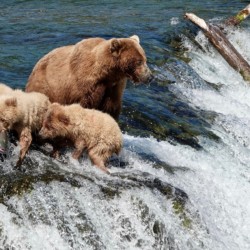 Mama ate most of the fish herself, but she did let her cubs steal one from her. 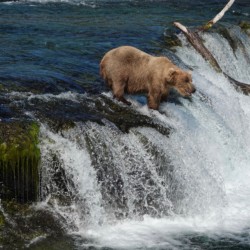 When salmon are plentiful, the bears eat only the skin, brains and eggs – practicing good energy economics. These are the most nutritious. The rest is left for the seagulls. 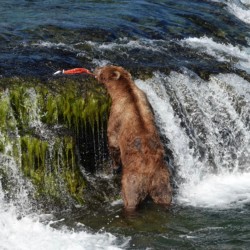 This opportunistic bear decided to eat the leftovers. Bears can eat up to 90lbs. of food per day. 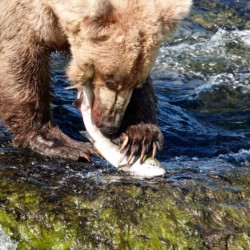 Look! At! Those! Claws! They can be up to 4 inches, and they never retract. 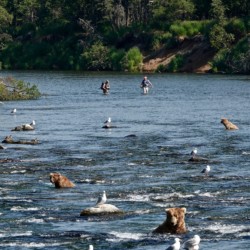 Yup, those guys are fishing. I sure wouldn’t want to have a salmon in my hand with hungry bears nearby. 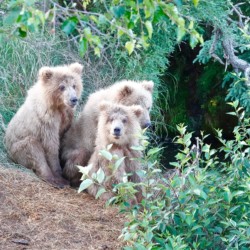 Mama bear told us to stay right here. This year there are lots of triplets, which means that food was plentiful last year. In lean years, there are less cubs. 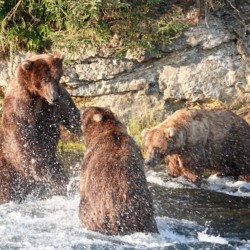 Splashing in the water to blow off some steam. Looks like they have a referee. 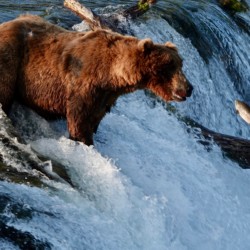 Here’s looking at you, kid. After a while, we were cheering the salmon if they made it past the bears. 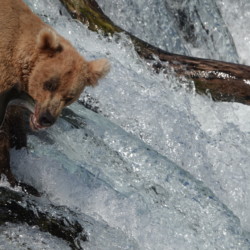 This salmon actually got away. Timing is critical to catch these slippery fish. 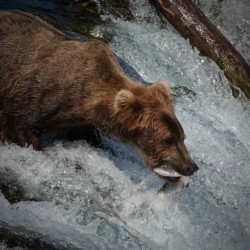 A proper catch, at least as far as the bear is concerned. 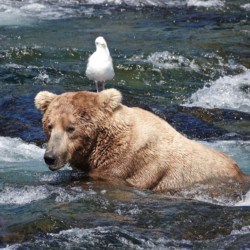 Well, the seagull isn’t really sitting on his head, but it looks like it! 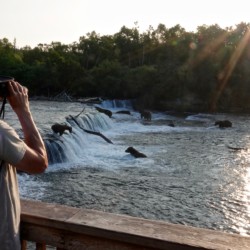 We watched bears at least 8 hours every day. At 7AM, we had the viewing platform to ourselves. 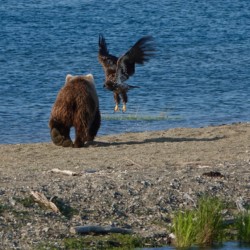 A juvenile bald eagle facing off with a grizzly. 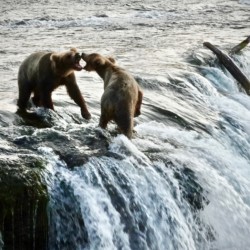 Bear fight! We saw many standoffs for territory. Subservience was immediate for smaller bears, but the ones of similar size had to duke it out. 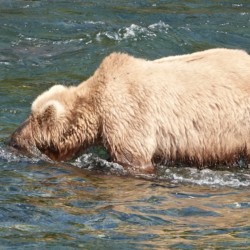 Snorkeling – when a bear looks underwater for fish, but keeps their ears above water to hear. 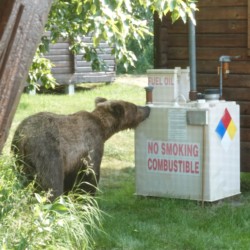 We had bears in camp several times, as it’s an open area. They’re curious about all sorts of things that can get them into trouble. 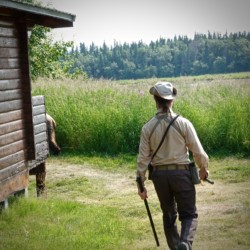 Bear “techs” roam the camp, to shoo the bears away with yelling and clapping sticks. They also have pepper spray if things get serious.