The name Petra is derived from a Greek word meaning rock. Famous for its rock-cut sandstone architecture and water conduit system, Petra is also called the Rose City because of the warm color of the sandstone.

Petra Archeological Park is over 2,400 acres, much larger than we thought.  I clocked in at 9 miles for the day, and Mike doubled that. Of course he got lost on the High Sacrifice trail and befriended a Bedouin teenager who didn’t speak English, but hiked with him for an hour and a half. He made it back to the hotel within minutes of last light. Always an adventure with this man, just like Indiana Jones. 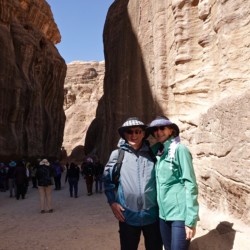 Petra has been on our bucket list for a LONG time!! We’re so excited! 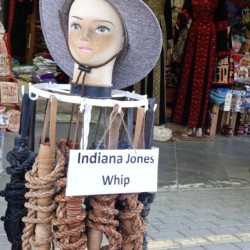 In “The Last Crusade”, Indiana Jones is after the Holy Grail, and what better place to “house” it than in a real-life place called “The Treasury”? 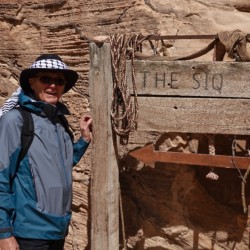 The Sheikh at the Siq, the main entrance to the ancient Nabatean city of Petra. 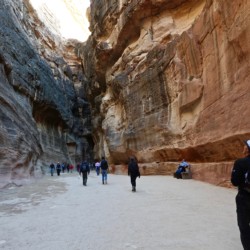 The two mile Siq into Petra weaves through slot canyons. Flash floods can make it impassable – all of Petra was CLOSED the day before we arrived. Lucky! 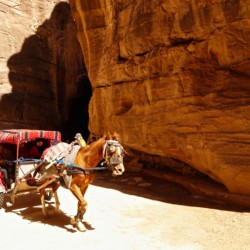 Donkey carts race to carry those who can’t do the walk. In the narrow sections, you have to plaster yourself against a wall to avoid being run over. 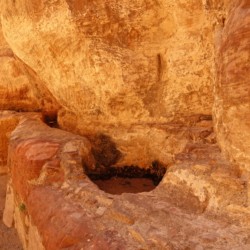 Petra had a sophisticated irrigation system to capture and store rainwater, enabling lush gardens, luxurious pools, and incredible fountains in the middle of the desert. 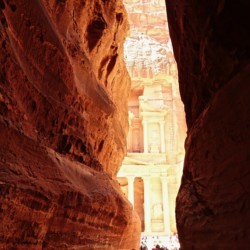 For the last part of our walk in, we were instructed to close our eyes and hold hands while inching along. When we opened our eyes, this is what we saw. WOW. 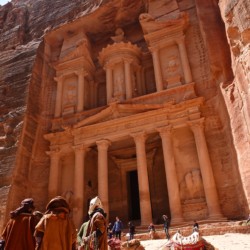 Al-Khazneh (Arabic الخزنة‎ – the most elaborate temple in Petra. Carved out of a sandstone rock face, it is believed to have been the mausoleum of a Nabataean King in the 1st century AD. It became known as The Treasury in the early 19th century because local Bedouins believed it contained treasures. 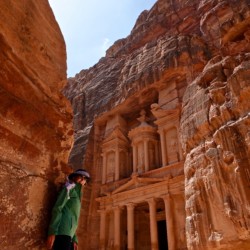 Many of the building’s architectural details have eroded away during the two thousand years since it was sculpted from the cliff. The carved reliefs are thought to be those of various mythological figures associated with the afterlife. On top are figures of four eagles that would carry away the souls. 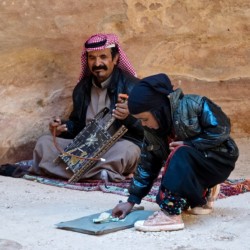 A local musician has his son as the cute kid asking for tips. 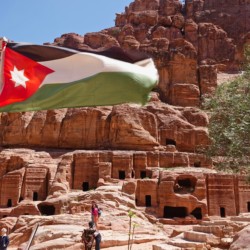 Tombs with the Jordanian flag, which looks just like the Palestinian flag with a star on it. 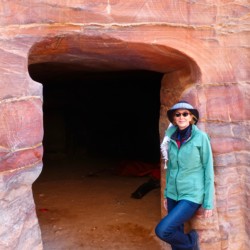 Entrance to one of many tombs. The colors in the rock are so vibrant. 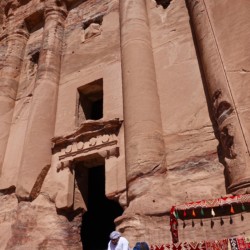 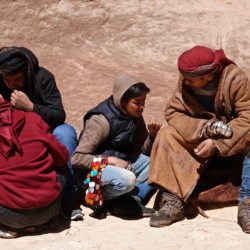 Children selling their wares. We were warned not to buy from them, because it encourages them to stay out of school. 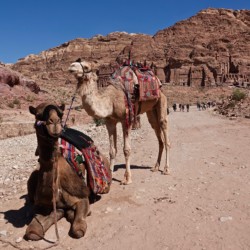 Camels posing in front of the “city” behind them. 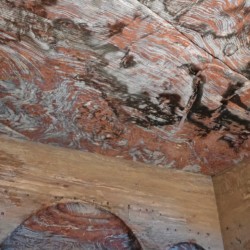 The ceiling inside is just rock, can you believe it? It looked painted! 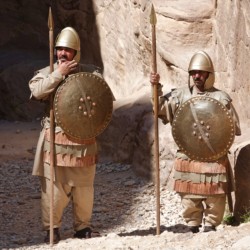 Jordan employs military veterans to be in costume as ancient Nabataean warriors. 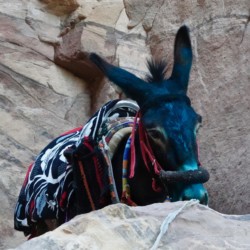 Yes, this donkey has blue powder makeup on. Kind of like the Jack Sparrow of donkeys. 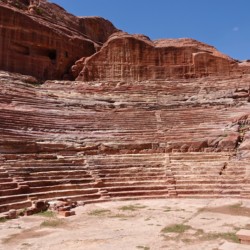 Like most other buildings at Petra, the 4,000-seat theater was carved directly into the rock by the Nabataeans. The stage was later rebuilt by the Romans when they occupied Petra. 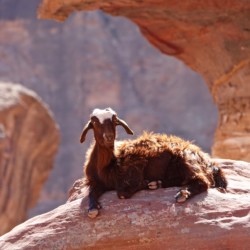 Goats roam all over the rocky terrain. The Bedouins weave goat hair to make their tents. 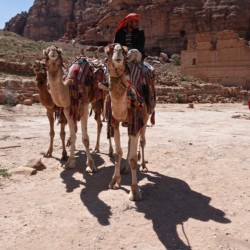 I thought for sure I’d ride one of these beautiful camels, but refused after the mistreatment we observed. 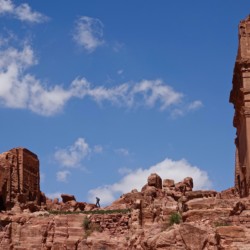 That’s Mike hiking on top of that ridge! 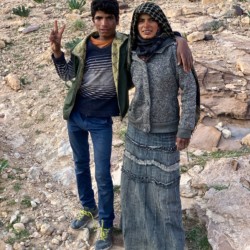 Mike’s Bedouin hiking buddy and his sister. Mike said they were so kind and helpful, despite the language barrier. 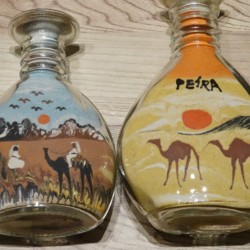 Sand art is created by hand, and each bottle is different. 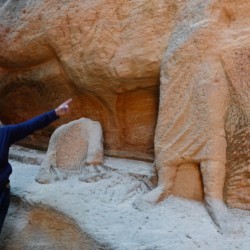 Our guide showing us remnants of a sandstone statue of a man leading a camel– but only feet and hooves remain. 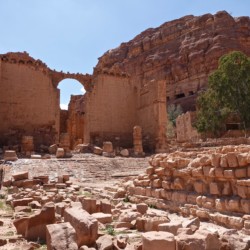 Palace of the Pharaoh’s Daughter is the oldest structure in Petra, 75 feet high! Reportedly the Pharaoh offered his daughter’s hand in marriage to the engineer who could develop a system to bring water to the palace. Archeologists found pipes underneath the palace, so maybe it worked! 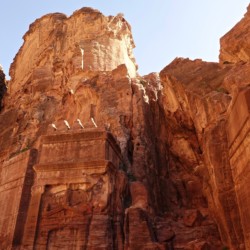 We were blown away by Petra, one of the New Seven Wonders of the World.