Gaining a new respect for family history. My grandfather, Burton Gilbert, served during WWII as a civil engineer and Major in Peleliu (an island in Palau, in the South Pacific, where we are now). Only now have I pieced together “the rest of the story”, through research and family interviews.

Peleliu was considered an important asset, to be captured from the Japanese in preparation for the takeover of the Philippines. US Military leaders estimated that they could conquer Japanese forces in Peleliu and reclaim the airfield in four days. The reality was three months, resulting in the highest death toll of any amphibious assault in U.S. military history.  Of the approximately 28,000 troops involved, a full 40 percent of the Marines and soldiers that fought for the island died or were wounded, for a total of some 9,800 men (1,800 killed in action and 8,000 wounded).  Over 10,000 Japanese were killed.  What the military leaders had failed to realize was that the Japanese had created an extensive tunnel system in the volcanic rock, complete with heavy artillery placement. The Japanese patiently waited while the US bombed the island, then opened heavy fire on the US amphibious landings, a tactic that surprised US troops.

Although my grandfather wasn’t supposed to set foot on the island until it was secure, he was called in to join the first wave of troops because of the extremely high casualties – to hand carry heavy ammunition, bring out the wounded on stretchers and bury the dead. All this in 115 degree heat while dodging sniper fire and watching planes carrying napalm overhead. He rarely talked about it, but could clearly remember those images of war. After the battle, he was instrumental in the reconstruction of the crushed coral airstrip, the primary reason for the battle in the first place.  He was hospitalized afterwards, from inhaling the crushed coral during construction.

Later, he was Post Engineer at Fort Lewis, and fell in love the Pacific Northwest, eventually deciding to retire here. Generations later, his descendants still call Seattle home. His military career took the family around the US and the world – France, China and even Japan, where he was Post Engineer for several years in Yokohama in the early 50’s. I’m so grateful that he made it through that battle, not only physically unscathed, but mentally able to handle the post traumatic stress.

He was the best grandfather, living until the ripe age of 89, with wonderful travel stories, and never an ounce of prejudice. He loved his time in Japan, and had great reverence for the culture and traditions.  I’m so grateful to others who serve and put themselves in harm’s way, and sad for the family trees cut short. I appreciate mine now from a new perspective. 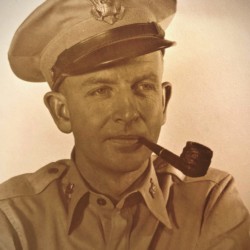 Gramps, looking Bing Crosby-esque. He was promoted to Lt. Colonel after the battle. 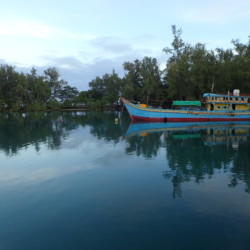 Our first glimpse of Peleliu. A junk of unknown origin reflecting soulfully in the water. 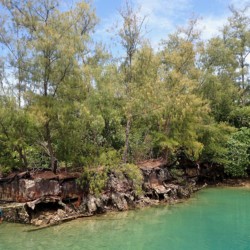 A decaying WWII ramp, which was used to get supplies and troops to the beach. 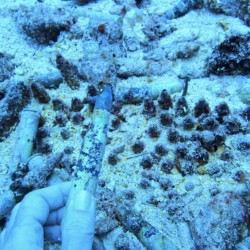 Our SCUBA dive at Peleliu was complete with ammunition still sitting underwater. 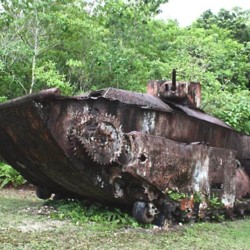 The Amtrac was essential to U.S. forces during WWII in the Pacific. The vessel could travel both in and out of the water – the first true amphibious vehicle. 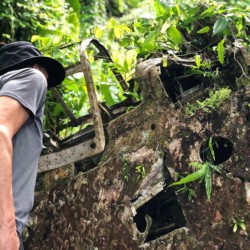 Captain Mike checking the cockpit of a downed Japanese fighter. 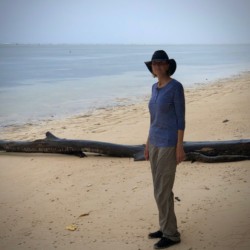 Such a tranquil beach. Raining tears when we were there. 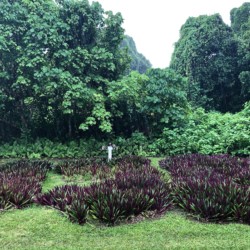 Do you see USA planted? This is one of many memorials on the island. 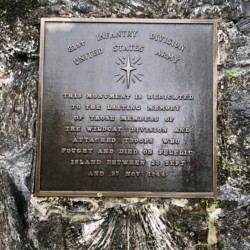 Many men gave life and limb here. This memorial is to honor those in the US Army. 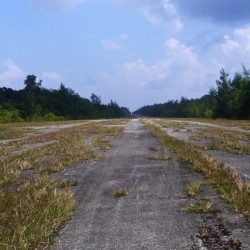 The all important airfield, still made of crushed coral. 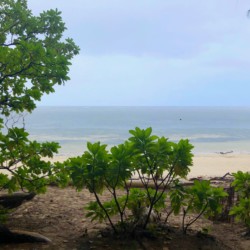 Based on historical maps, this is the beach where Gramps landed. 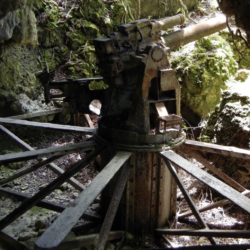 Japanese heavy artillery was well hidden in camouflaged caves, so it wasn’t bombed by US aircraft. 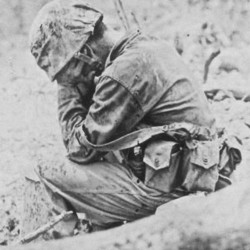 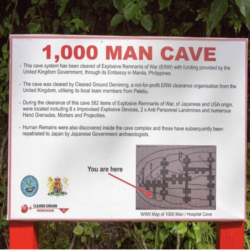 The most disturbing site on Peleliu is this cave – which you could call an execution cave. Inside is a series of tunnels in which a thousand Japanese soldiers held their positions, refusing to surrender. 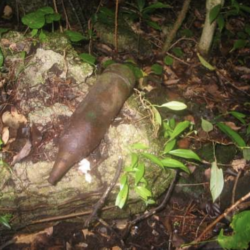 The Americans were forced to block the exits, leaving only two open. In one exit they fired explosives and flame throwers, attempting to push the remaining soldiers out the last exit. The Japanese would not give up. They drank sake in solidarity. 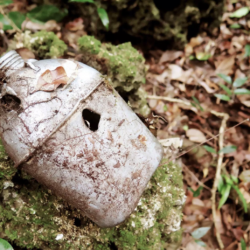 Canteen with a bullet hole.