Guam – where America’s day begins, is in Micronesia right next to the international date line.  The US military controls about a third of the island.  During WWII, the Japanese occupied Guam for over 2 years, subjecting Guamanians to beheading, rape and torture until the US military recaptured the island in 1944.  US Naval ships in WWII were a welcome sight, but they carried an undetected invader – the brown tree snake.  That non-native snake has eaten the islands birds into extinction in the last few decades.  Without birds, there has been an explosion in the number of spiders.  In order to combat the snakes, the US military drops thousands of dead mice by parachute each year, hoping they will catch in the tree branches.  The mice are filled with Tylenol, toxic to the snakes.  Snakes, spiders and dead mice.  Let the nightmares commence. 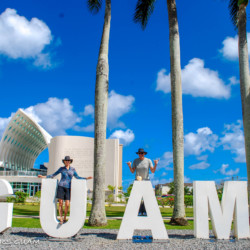 Behind us is the Guam museum, shaped like a giant book.

A brown snake. Harmless to humans, their venomous bite packs a punch on small animals. 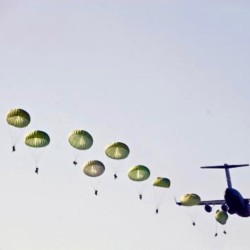 Can you imagine having a dead mouse land on you?! 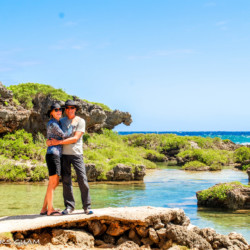 A beautiful protected snorkel area, very popular with the locals. 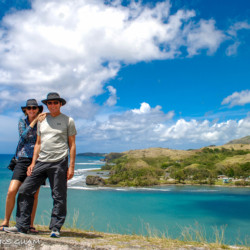 What a sun kissed day we had, especially considering that there was a typhoon here just a week ago! 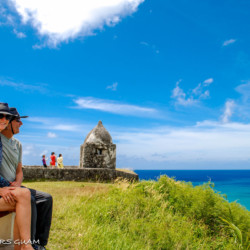 Nuestra Señora de la Soledad is a Spanish-era fort overlooking the bay where Magellan landed in 1521. 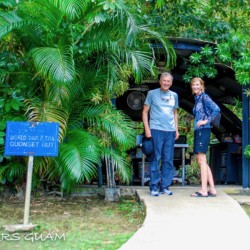 Quonset huts were first created in WWII as a quick shelter made of corrugated metal. 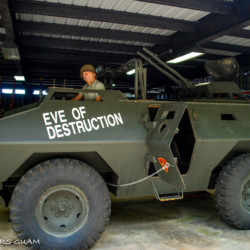 Ready to drive the tank over some snakes? 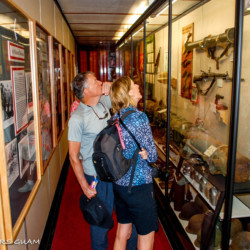 Looking over the WWII weapons. 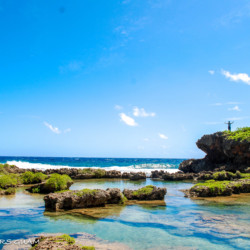 Mike climbed up some gnarly broken stairs to get this view. 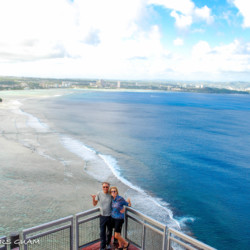 Hangin’ loose! We could see turtles swimming below us in the clear water. 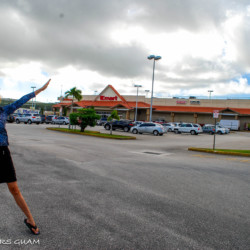 Say CHEESE! This is the world’s largest K-Mart. There is no Target, CVS or Costco here, so K-Mart is the only game in town. 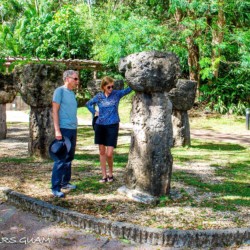 Ancient “latte” stone pillars may have been used to raise a platform for shelter to avoid wet ground. 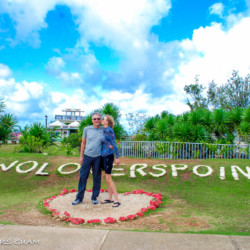 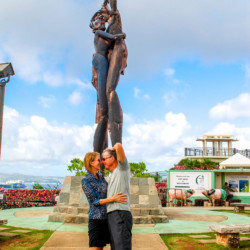 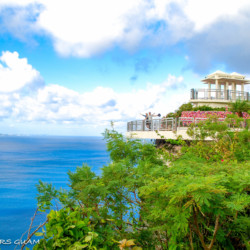 As legend has it, the two lovers knotted their hair together and jumped off the cliff. True love.