Nürnberg was pragmatically chosen for annual Nazi rallies because it was centrally located in Germany, and had ample space for large demonstrations.   Rallies were held from 1927 to 1939, staged as elaborate propaganda events, and were attended by as many as 700,000 Nazi Party supporters.  During a five-day battle in 1945, Nürnberg was jointly invaded by US, UK, French and Canadian Forces.  After heavy casualties and bombings, the American flag was hoisted at Adolf Hitler Platz, formally ending the battle.  Ten days later, Hitler and his wife committed suicide. 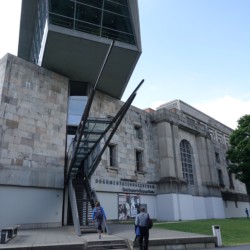 The Documentation Center “Dokumentationszentrum Reichsparteitagsgelände” was built in an unfinished wing of the Nazi Congress. It stands as a historical reminder of the megalomania of Adolph Hitler, and shows how his path of terror began here.. 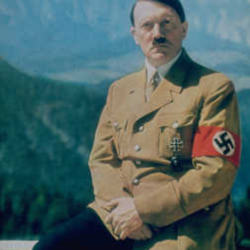 Hitler in the late 1920’s had rock star popularity in Nürnberg. Teenage girls thought him handsome, and enthusiastically compared how many times they’d seen “The Führer” or leader. 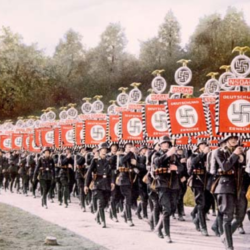 A typical show of pomp and pageantry at the annual Nazi rallies in Nürnberg. Anecdotal accounts told of pressure for every home in the city to hang a Nazi flag. 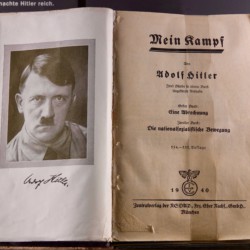 Hitler published his shocking antisemitic treatise in 1933. During his rise to power, the book was in high demand. A complimentary copy was provided to every newlywed German couple. 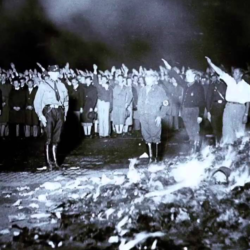 In 1933, the German Student Union proclaimed a nationwide literary purge by fire of all non-German books, or any books critical of the Nazi regime. 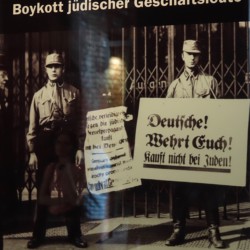 The 1933 boycott of Jewish businesses. Jewish lawyers and doctors were dismissed from service. 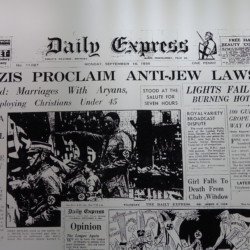 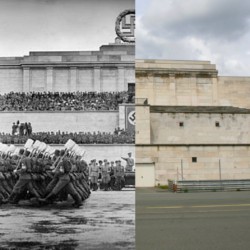 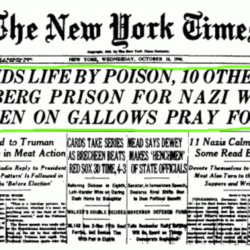 Nürnberg was chosen for the international tribunal to try German officials for war crimes, specifically because it had been the epicenter of the Nazi Party. Goering, second in power to Hitler, ingested cyanide the night before he was to be executed.