The lighter side of Nürnberg

For centuries, Nürnberg was the undeclared capital of the Holy Roman Empire and the preferred residence of most German kings, who kept their crown jewels here.  “Nürnberg shines throughout Germany like a sun among the moon and stars,” gushed Martin Luther, a famous German professor and theologian who came to reject teachings and practices of the Roman Catholic Church. 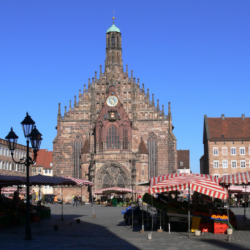 The charming Hauptmarkt and Frauenkirche (Our Lady Church) mark the center of town, where handmade goods are sold. 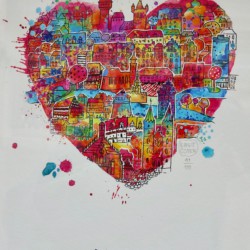 Local pride for local landmarks, painstakingly rebuilt after World War II by using the original brickwork which lay in ruins. 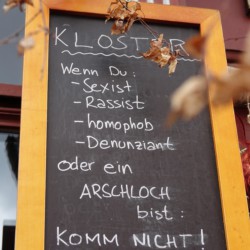 Translation: If you are sexist, racist, homophobic, an informer or an asshole, don’t come in here. 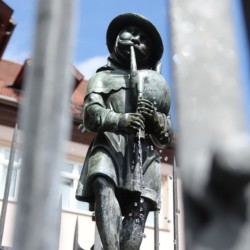 Legend has it that a drunk and asleep bagpiper was loaded onto a cart for the deceased during the plague. Only when he started to play his bagpipe did they realize he was still alive. 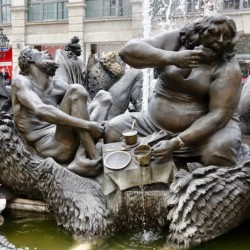 The Marriage Fountain is a 1981 artwork gruesomely displaying facets of married life (like when the wife eats too much cake). It’s actual purpose is to cover a ventilation shaft. 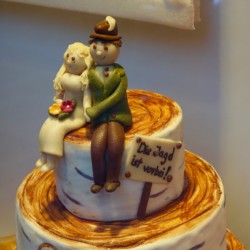 On a happier marriage note – “The Hunt is Over” 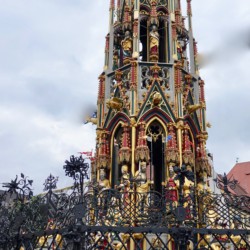 A visit to Schöner Brunnen (Beautiful Fountain) assures not only that your wish will come true, but that you will return to Nürnberg. 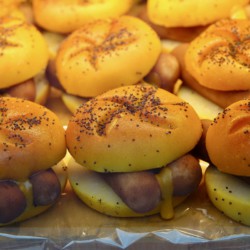 Bratwurst? No, this is Nürnberg’s famous marzipan replica artistry. The taste is of almonds and honey. 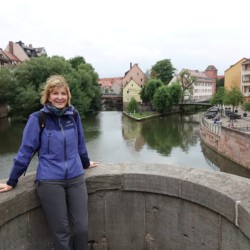 Canals and bridges on the Pegnitz river that winds through the city.