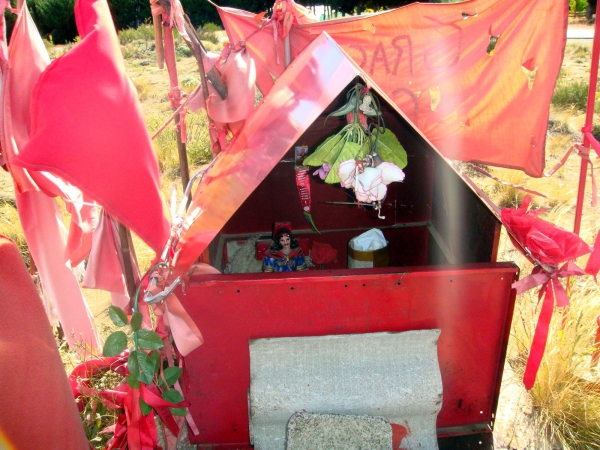 Another popular roadside shrine is a little red building festooned with red flags – you can see one at a lot of the major road crossings in Argentina. See the little gaucho inside? That is Gauchito. The popular legend is that this gaucho fell in love with a wealthy widow. Unfortunately for him, the chief of police was also in love with the wealthy widow. The chief of police falsely accused him of robbery and tried to kill him. To escape, the gaucho joined the military, fought in Paraguay and eventually came back to his village as a hero. But when he arrived at the village, he was forced to return to the military again, this time in the Argentine Civil War, brother against brother. He grew tired of fighting and decided to desert. When the police chief found him, he was tortured and hung by his feet from a tree. The gaucho said, “Your son is very ill. If you pray to me I will save your child, if not he will die.” The police chief killed the gaucho and returned home to find that his child was indeed gravely ill. Very frightened, he went back to the forest, gave the gaucho a proper burial and built a small shrine to him. He prayed for his son, who recovered. Word spread of the miracle of the gaucho, or Gauchito “little gaucho”. Now people pray to him for safe travel, and little Gaucho medals in the car are as popular as St. Christopher medals in the US. Interesting, huh? Another unofficial saint.