Seattle – Opening day for the Mariners 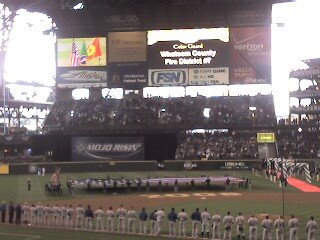 March 31 was opening day – and the coldest in Seattle since 1967. Here is the color guard next to a giant flag unfurled on the field while the National Anthem was played. That alone was enough cause for goosebumps… but so was the snow that started in the 5th inning. We were thrilled that the M’s pulled off a victory against the Texas Rangers, and that someone had the forethought to design this stadium with a retractable roof!

P.S. We skipped all the traffic mess and walked about a mile and a half from our condo to get to the game :)